Enigmatically entitled S.P.Q.R. (initials that refer to the ancient “Senate and People of Rome”) the mural depicts the UCLA research library in ruins, presumably after a big earthquake wipes out Los Angeles and the language of the region mysteriously reverts to Latin. The painting is one of the few murals associated with the Los Angeles Fine Arts Squad that has lasted over the years because it has been protected indoors. 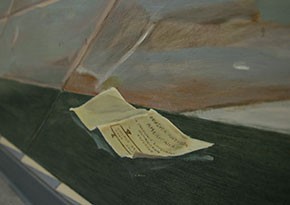 The viewer can glimpse an amusing detail: On the floor of the rooftop of a nearby building lies a crumpled concert program of “Ancient American Music” featuring the work of Aaron Copland, Bob Dylan and John Cage.