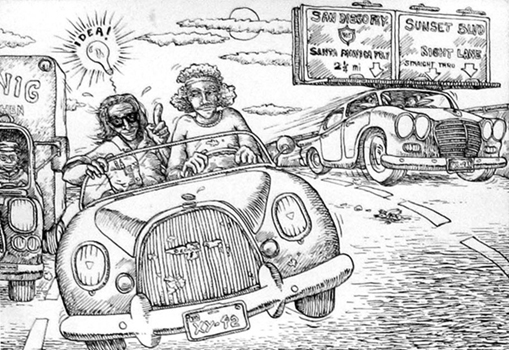 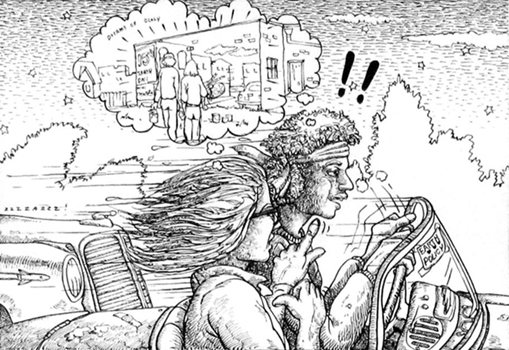 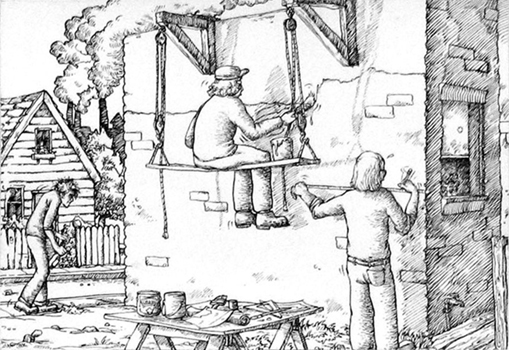 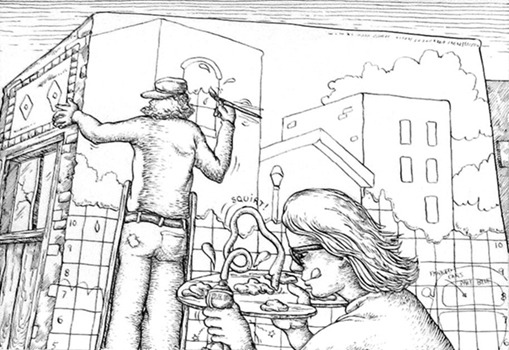 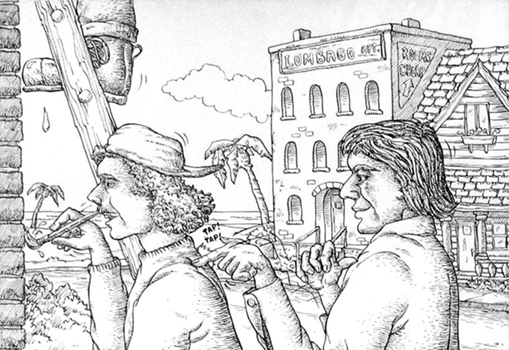 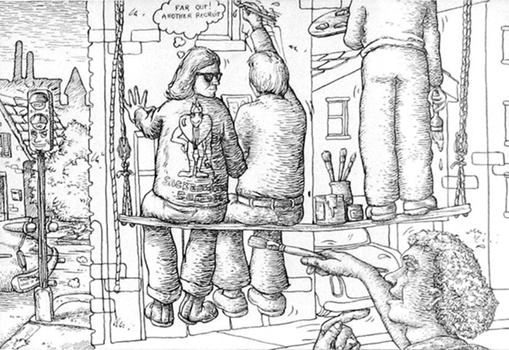 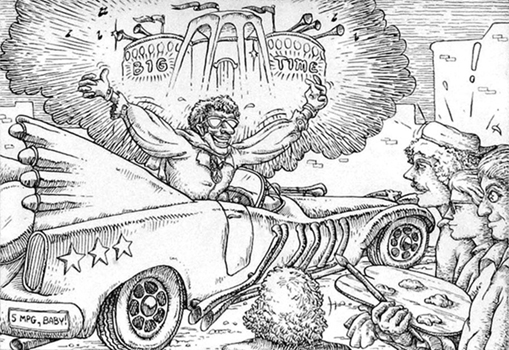 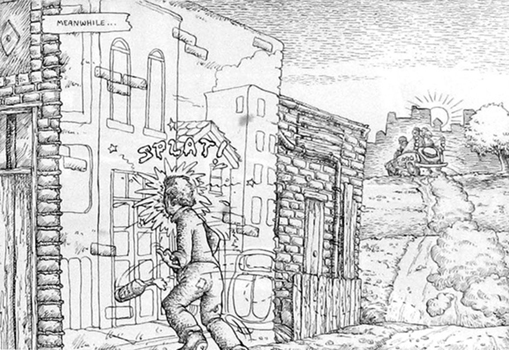 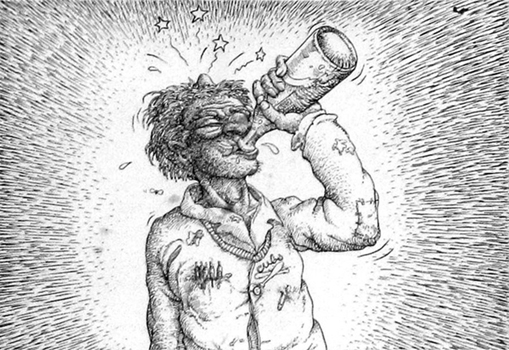 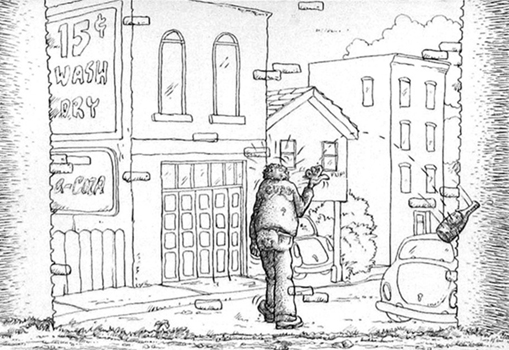 Heading West on the 10, Terry and Victor get an idea for a new project the two of them can work on...

Excitement grows during this fruitful rap session between Vic and Terry. They begin to plan their first project--a large-scale wall painting on the south wall of Victor's Venice Studio.

VENICE, CA: Valentine's Day, 1969 — Vic and Terry prepare the brick wall with Italian plaster, the kind the Renaissance painters of Italy used for their frescoes. Terry starts grid ding out the wall.

The image begins the form- a the west-ward view of Brooks Avenue. You can taste the paint!

The project attracts the attention of two students of Terry's from UCLA. A young Leonard Koren joins up!

After weeks of painting, the group presents the painting to an excited and bewildered Venice audience.

Before long, club owner Michael Hewitt rolls into Squad territory to contract the group for a painting on his massive googie-style building. Leonard has stars in his eyes!

The Squad moves onto their next project…in Hollywood! Meanwhile, a local drunk has his l'oeils tromped.

This guy gets it.

Cartoon images for the film "The Fine Arts Squad in Hollywood"

The four-person artist whose wall painting already present a Through the Looking Glass reflection on Brooks Avenue in Venice and a spiritual vision to astonish and awe harassed motorists passing the now defunct Climax nightclub on La Cienega, has just completed its third large work. Located on Ocean front Walk and 18th St. in Venice, the painting is a mirror reproduction of a section of Ocean Front Walk a few blocks away. But the pleasure of recognition is jarred when the viewer realized that a fine layer of snow covers the palm trees and garbage cans and the sun is rising in the northeast through a stormy dark sky. The painting arouses speculation upon the temporary quality of our existence, possibilities of global upheavals, and, finally, the adaptability and endurability of man. Beachers, bicycle riders and motorists stop by the handful every day to gape at and enjoy the strange, uncomfortable feeling of mystery the painting inspires. Ecology awareness and spirituality are not accidental themes involved in the message and intent of Terry Shoonhoven [sic], Vic Henderson, Leonard Koren and Jim Frazen [sic], our Venice artists who pooled their talents to create an art of the streets— large, quality paintings out in the open, accessible to anyone passing by. One very obvious problem that arises when an art work literally belongs to whomever views it, is the financial one. Many Fine Arts Squad fans feel the city of Los Angeles would do well to recognize and support this talent, the way New York City has sponsored some of its better known pop artists. In the meantime, the Fine Arts Squad is sumbolically [sic] selling their latest painting by the square, giving anyone who enjoys their work and wishes to see it continue, a chance to offer support. The squares, original sectioned for the purpose of laying out the painting, cost $5.00 each. Purchasers receive a unique certificate of ownership and the satisfaction of knowing that their donation helped support and alternative art, one that is place [sic] where it can be viewed and enjoyed by the people of Los Angeles. They can be reached by writing to L.A. Fine Arts Squad, 52 Brooks Ave., Venice, Calif.